…quite hard to put into words. Whoever found themselves around the lake in Crato mid-August this year, carries with them a unique piece of a wild collective ceremony. We got lost in labyrinths of musical architecture and rappelled down deep valleys of personal inquiry and reflection. Three years of distancing, uncertainties, and pandemic-postponed daydreams, erupted in a profound need to release, reconnect, renew, shed some skins and reinvigorate our mojos. All our mojos have been put to the test these years, either by social distancing, wage slavery, mounting ecological anxiety, or the quickly collapsing promises of a dominant world monoculture ever alienating us from our ancestral, psychedelic spirit.

Alongside all the elation, a large change within the Waking Life miniverse was the doubling of our human capacity. This decision was quite simply connected to existential risk, if we didn’t double, we wouldn’t be able to make the money needed to pull the whole thing off. Welcoming so many of you was a humbling validation, but growing too fast also puts the spirit of our little communitarian project at greater risk. More bodies means more environmental stress, more smokers, more packaging, more need to take care of the surroundings, and this was a rude awakening for us staying on site to clean up when the music ended.

A sea of ciggie butts burrowed into the dirt and dust and improperly discarded garbage kept us busy until, well, today. The issues were not only ecological, we saw someone ‘borrowing’ a fire-extinguisher, more filming and phones on the dancefloors, some cheap vandalism of carefully built structures: we could consider these events ‘normal incidents’ given the context, but this is not the way we want to roll. So, we’ve taken some time to listen to your feedback and reflect both on the peak experiences & the comedown.

What can we do for you?

Trust us, we’re not into us versus them narratives. There is no you and us, other than in very basic functional ways. We are organizing things, but you are creating the vibe, the space, the energy, the cleanliness, the care with us. When we tweak things and have feverish ideas in the middle of the night, we’re doing them for you and us, and that’s where the two blur into a mollyesque we. If a moment comes when this we doesn’t feel real, doesn’t feel strong, that’s when we’ll probably retire the whole project and go do something else.

Now, going back to the functional division, there are things we in production are taking on such as developing better water points, working on more female-friendly facilities, increasing toilet maintenance even more, and looking for more sustainable products at the bar and food shops. We will also keep working on increasing general comfort of the campsite. In 2022, shade structures alone cost over 50k in materials and four months to build, making it one of the most work-intensive operations in 6 years Waking Life. We have planted thousands of trees that need year-round maintenance and got watered by hand by a tireless watering team between May and September, 6 days per week. Naturally, they will take the time they need to grow and make a canopy. Every year we continue to invest time and resources in the campsite, but space is also limited, so finding the right balance and setup is a work in progress and will probably take a few more years. In 2023, till now unexplored land around the lake will offer new spaces to walk, rest and hang out under natural shade.

Finding a golden mean when putting together a community-oriented event isn’t easy, for instance, the dream scenario would be that we don’t even need festival staff to pick up litter, and that the participants can self-organise to do this, even if it’s not their own trash. We share a collective responsibility of the space: seeing trash and not picking it up makes you co-responsible for it being there. Our EcoPiratas team worked tirelessly to keep the communal spaces clean, but they could instead be working on composting or upcycling, and not picking up discarded candy wrappers, cups and bottles. At what point do supporting services start to enable carelessness or disrespect? 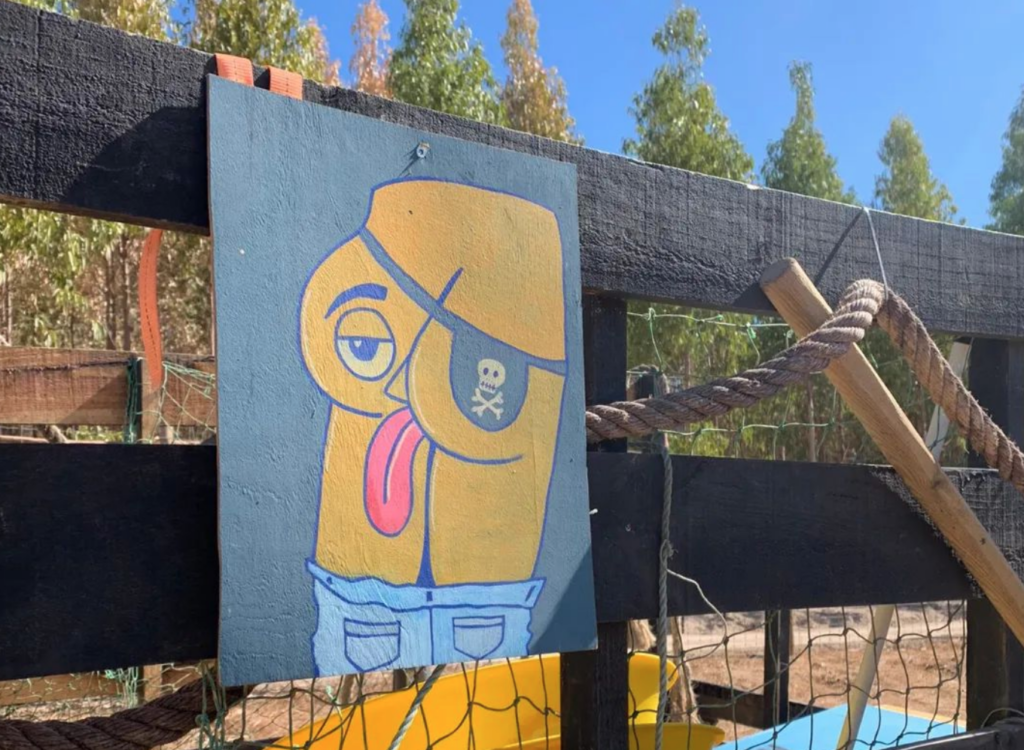 What can you do for you?

One main thing we need everyone’s support with, is better collective care. Community cohesion is no easy feat, but we’re constantly looking for ideas that will be antidote to this, and the goal is to model Nowtopian vibes. We rely on active participation and participatory structures, constructive feedback is always welcome. We appreciate sass, gurl, threats however, are not necessary : ) Try asking questions in a different way, what could everyone do to improve things?

Reflecting on this year and looking toward the next

One thing we’re extremely happy with and honoured by, is that 800 tickets were requested by locals of Crato (free of charge), meaning that about 10% of participants came from the local hood. Also this year we won our first funding application at Turismo de Portugal, for projects contributing to the reactivation of local economies by bringing together international and grassroots communities via initiatives based on environmental, social & cultural regenerative practices.

Some things worked well, despite our microcity’s larger total population. The stage reconfigurations generally meant fairly non congested dancefloors and bars, creative camps bloomed, and the nocturnal programme of Apuro had the kind of engagement we could only have hoped for. The good stuff is easier for us to build on. The fixes however are our primary challenges, and our to-do list isn’t short. Hygiene and care are number one priority. Water points and handwashing points must be separate, each toilet zone should have its own hand washing point with a foot pedal, toilets need to keep on improving year after year, and restaurants will get more frequent inspections. The first aid squad was very poor, we will find another team to work with that will operate within a cooler tent.

One topic raised quite a stir in the days and weeks after the festival ended. We’re well aware that quite a few people got sick – diarrhea, vomiting, stomach bugs, and of course we’re sorry to hear that this affected some people’s time. We cannot say for sure what the main cause is, but dust and heat and lots of people living closely together for a week in a rural area, coming from different corners of the world, from other festivals, constantly exhausted, sharing drinks and cigarettes with compromised immune systems, means that some casualties to illness are almost inevitable. But slowing down the spreading of such a virus when it arrives is paramount. What we can do is, make more efforts to keep things as hygienic as possible, both via some of the aforementioned improvements and a community-wide effort to keep things as clean as possible.

We really need to be clear that the water is drinkable. It comes from the public grid, we had it tested, and we need to pass these safety tests by law. But we will nonetheless research and invest more in additional purification systems. We will also investigate the chlorine levels which may be attacking good intestinal bacteria that could lower people’s natural immune defenses (even more). We also need hydration stations in the parking area, we know. We did not have authorization for that this year but, if all goes well, next year the campervan parking should get a central point with water and a sanitary area.

Another moment of outrage this edition came from queueing at the entrance. Clearly people did not leap for joy at this wonderful opportunity to have a mediation marathon. We only have a set number of metres of lanes (which were too small for some big vehicles), and we did not have approval of the municipality to close the northern access, which resulted in cars coming in from all sides, and difficulties at the crossing. We can make lanes a bit bigger, and perhaps add a few more if we can get the neighbouring land, but it will be difficult to cut the waiting time by more than half. Also, if people have their tickets downloaded beforehand, it moves the process along for everyone. If we are trying to connect you to our shitty mobile hotspots to download your ticket, if you haven’t personalised your ticket and changed the name from your second cousin’s neighbour’s name who originally bought the ticket, if you’ve brought your dog along while we’ve explicitly stated no pets allowed, then you delay the entire process for everyone, and the delays have a temporal domino effect so this is where we need everyone’s cooperation.

Finally the shuttle bus issues, to round off the triad of pains-in-peoples-asses. It seems hard to rely on the shuttle company. Some shuttles from Crato to Waking Life had delays, one bus that would take people from Waking Life to Lisbon showed up 2 hours late. This of course sucks and we are working on new terms of working with them. We also need to improve our communication around this and provide more continuous shuttles.

We’ve tried several years now with mere ‘suggestions’, and it seems that friendly advice isn’t working as well as we’d hoped, so for 2023 we are considering imposing a few rules.

If you are busted:

– throwing waste on the ground;
– taking pictures of people nonconsensually or film on / around the dancefloor;
– pissing in the lake;
– stealing or vandalising;

you will be asked to 1) pick it up and dispose of it properly, 2) stop filming, 3-4) always intentional (even more so than the obsessive need to film everything), so no second chances here. If you refuse to respect these simple rules, you may be asked to leave the festival.

This summer we experienced a palpable feeling of freedom, of beings expressing themselves in ways that Default World doesn’t permit them to, there was lots of evidence of community care but there were also breaches of care that are often easy to avoid. We need to work at improving this vibe with each edition. This experience can be perceived as an annual pilgrimage, with a deeply personal spiritual dimension, so it is up to all of us to do it justice.

There was of course an abundance of feedback for tweaking the experience design, both during build-up, during the festival itself and during breakdown, and we will forevermore continue tinkering and experimenting with this – it’s the spring of ingenuity.

And yes, there will be quite a few new surprises regarding the terrain, the music programme, the arts, the counterculture, the spaces to heal, to connect and to bravely explore life’s juices.

The aesthetic theme for Waking Life 2023 is that of fluidity. Honouring the life-giving watering hole around which we gather, the liquid ecosystem that reflects the entire festival nexus and to which we come for refreshment, renewal, ablution, tranquility and the ripples of which are charged with the groovement we all come to be a part of.